It all started here. The Langenheim House of 1833 at 1315 Liverpool Street, shown in 1967. It was rescued, restored, and remodeled for apartments by PHLF and the Manchester Citizens Corporation.

The Pittsburgh History & Landmarks Foundation was organized in 1964 when Liverpool Street in Manchester and other areas of the North Side were set to be demolished. PHLF and residents initiated the Manchester Program, the first of its kind in the U.S. for low-income and minority families in which federal, state, and local funds were used to create a restored, economically sound neighborhood, affordable to its residents. PHLF and the Manchester Citizens Corporation continue their work today.

“The origin of PHLF has long taken on a legendary character. In early 1964, James D. Van Trump and Arthur P. Ziegler, Jr. were walking along the 1300 block of Liverpool Street in Manchester, looking at a remarkable row of mansard-roofed double houses and deploring a condition that foretold their replacement by new housing.

The idea came to them of a preservation group that would find means of continuing such houses in use, externally restored, fully habitable, and with the same kinds of people, if not exactly the same people, in each house. … Such preservation would have to prove itself to officials and money sources, and to neighborhoods themselves.

The Pittsburgh History & Landmarks Foundation was incorporated on September 30, 1964 … as an organization with practical and considerate alternatives to conventional urban renewal.”

PHLF’s work in Manchester started with a preservation study of the 1300 block of Liverpool Street. By 1966, a revolving Preservation Fund had been established and PHLF began to work aggressively to save and restore buildings in historic neighborhoods. A Manchester street view when PHLF started working in the neighborhood

Listed on the National Register of Historic Places in 1975 and designated a City Historic District in 1979, Manchester is primarily a neighborhood of impressive red brick houses with stone trim and wooden porches set on an orderly street grid. Here PHLF worked with neighborhood residents to create the first historic preservation district in the nation primarily for African Americans; the first preservation program using Title 1urban-renewal funds for the restoration of houses for low-to moderate-income residents and a series of incentive programs designed to combat displacement and encourage longtime residents to stay and become part of a revitalized community.

In Manchester, PHLF helped organize residents into what is now the Manchester Citizens Corporation and in the Mexican War Streets, PHLF began an experimental program, the first of its kind in the nation, in conjunction with the Pittsburgh Housing Authority to restore dilapidated buildings and houses while maintaining affordable housing for the community thus avoiding dislocation of the neighborhood residents. PHLF has always preferred to work with and support established neighborhood community organizations, offering services and administering funding for neighborhood projects through established community-based groups. To that end, PHLF also worked actively with neighborhood residents to form such organizations where none existed like the Manchester Citizens Council and the Mexican War Streets Association, two important civic groups. The most notable achievement of this kind is undoubtedly the Pittsburgh Community Reinvestment Group (PCRG), originally an umbrella organization of community groups founded in 1988.

Beyond Manchester and the Mexican War Streets, one of PHLF’s early and important historic preservation victories on the North Side was the fight to save the former Post Office, a grand Italian Renaissance building of 1897 and one of the few public buildings of the City of Allegheny to survive the demolition of the Central North Side. The building was saved when PHLF agreed to purchase and occupy it following a 1969 PHLF proposal to restore the building and transform it into a museum of Pittsburgh and Allegheny County history as well as a vital development centerpiece on the North Side.

Renamed the Old Post Office Museum, the building served as the headquarters of PHLF starting in 1971 and housed architectural artifacts salvaged from demolished buildings, and a sculptural garden included sculptures that had been salvaged from the former Manchester Bridge, which was demolished in 1970. The building would be the home of PHLF until 1985 when a new use for it was proposed as the home of the Pittsburgh Children’s Museum. PHLF gave the building and garden to Children’s Museum in 1989.

Landmarks Community Capital Corporation, PHLF’s nonprofit lending subsidiary, formed in 2007 as an outgrowth of the revolving Preservation Fund established in 1966, is providing lending, grant monies and technical assistance on the restoration of buildings on Columbus and Liverpool Streets.

“After decades of work, with so many successes amidst continuing challenges, it is gratifying to see how Manchester’s renewal is being accomplished through the restoration and reuse of existing historic properties, coupled with compatible new construction,” said LCC President Michael Sriprasert. “This begins a program for the neighborhood where we began almost 50 years ago.” 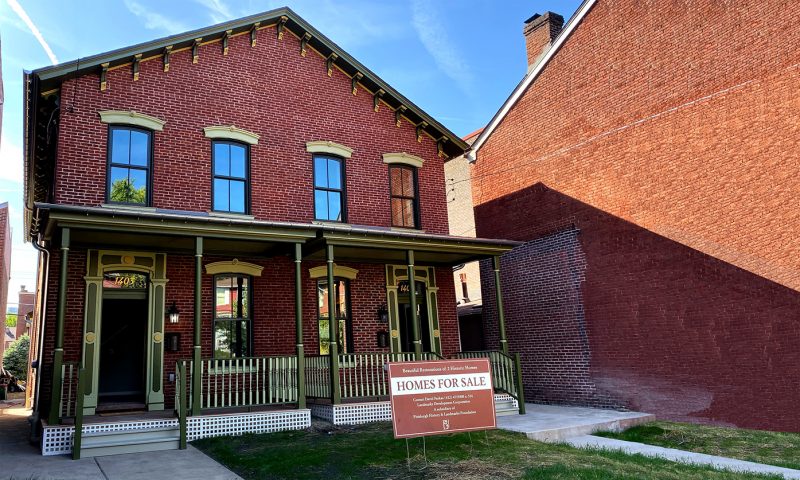 Built c. 1874, the townhouses are set back from Pennsylvania Avenue and from Stedman Street, providing space for front and back yards, and the back yards have gravel parking pads.

In 2017, the Landmarks Development Corporation (LDC), a for-profit real estate development subsidiary of PHLF, acquired two houses, 1403-1405 Pennsylvania Avenue in the Manchester Historic District. The three-story, red-brick buildings had been vacant for years and had deteriorated badly. They were in fact, the last remaining most run-down houses on a mostly intact street of well-maintained houses. LDC hired Milton Ogot, architect, who teamed up with CitySTUDIO and HNMS, Inc., a general contractor. They addressed structural issues caused by foundation settlement, rebuilt three of the four exterior walls, installed forty-two new windows, and fully modernized the two townhouse interiors, among many other improvements.

“Funding from TriState Capital Bank, through a Neighborhood Partnership Program, and from many other donors enabled PHLF and LDC to save these buildings from demolition,” said Michael Sriprasert, president of LDC and vice president of PHLF.

Both townhouses have three bedrooms and two-and-a-half-bathrooms, including a master suite on the second floor, ample closet space, and an open-concept third floor. Both include central air conditioning, new mechanical systems and utilities, hardwood floors, ten-foot ceilings, an open-concept kitchen and dining area, first floor powder room, and second floor laundry facilities. Both houses were made available for sale for $250,000 each to individuals in household sizes whose income does not exceed 120 percent of the area’s median income, in addition to other qualifications. 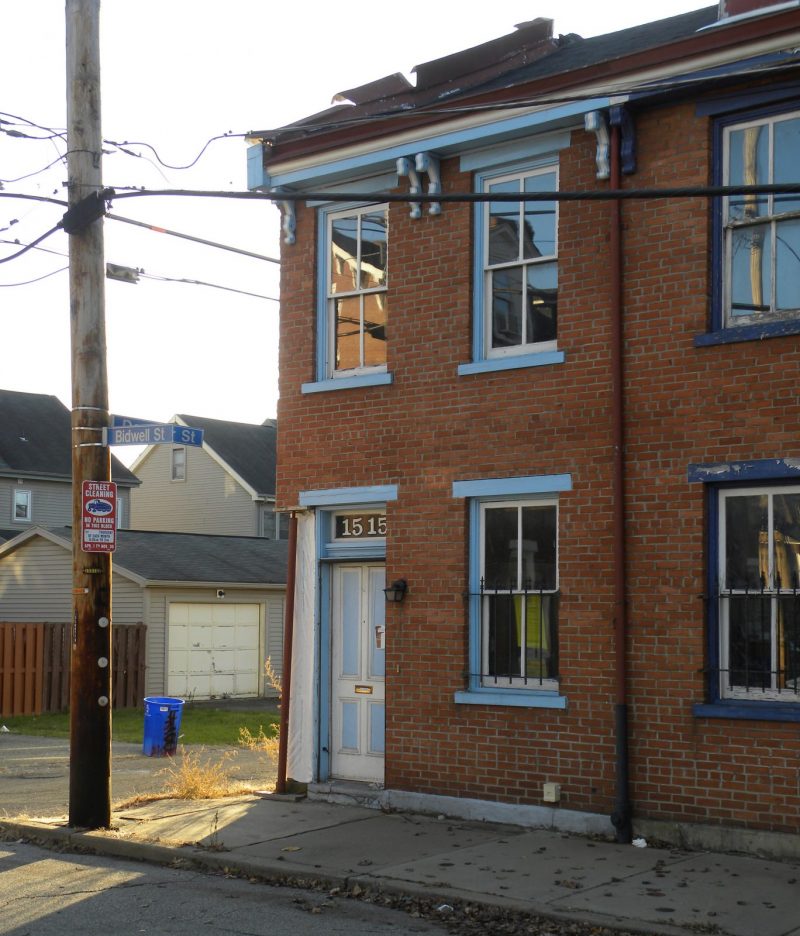 In 2020, LDC is renovating 1515 Bidwell Street as an affordable, single-family home. The side wall of the two-story, red-brick building had started collapsing when LDC purchased it in 2018. The building was stabilized in 2019, and Milton Ogot and CitySTUDIO completed construction drawings in January 2020. The house anchors the corner of a modest block of row-houses in Manchester.