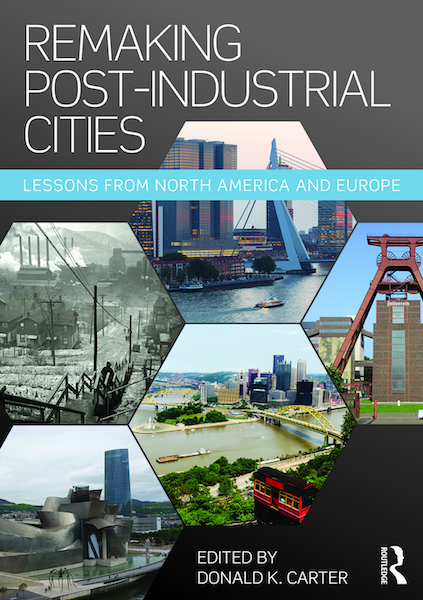 In this lecture, Don Carter, director of the Remaking Cities Institute at Carnegie Mellon University, tells the story of Pittsburgh and other post-industrial cities through his recent book, Remaking Post-Industrial Cities: Lessons from North America and Europe. The book examines the transformation of ten post-industrial cities after the precipitous collapse of big industry in the 1980s on both sides of the Atlantic. Carter brings together in-depth case studies of five cities in North America (Buffalo, Detroit, Milwaukee, New Orleans, and Pittsburgh) and five cities in Europe (Bilbao, Liverpool, Rotterdam, Ruhr Region, and Turin). The book documents the cities’ recoveries in the thirty-year period from 1985 to 2015.

About the presenter: Don Carter is the David Lewis Director of Urban Design and Regional Engagement of the Remaking Cities Institute at Carnegie Mellon University. He also teaches in the Master of Urban Design program in the School of Architecture. Prior to joining CMU, Don was the president of Urban Design Associates in Pittsburgh, where he led many of the firm’s most complex projects, drawing upon his broad international experience as an architect, urban designer, and developer over 36 years. He is a Fellow of the American Institute of Architects, the American Institute of Certified Planners, and a member of the Urban Land Institute where he was national Chair of the Inner-City Council. He holds a degree in Architecture from Carnegie Mellon University and did post-graduate study in urban design and regional planning at the University of Edinburgh, Scotland.