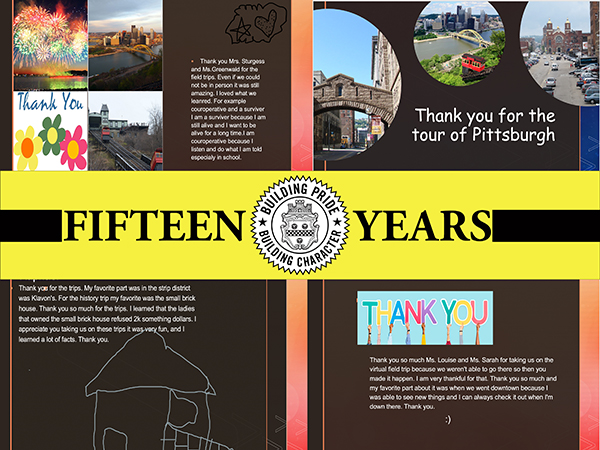 Third-grade students from Pittsburgh Greenfield created an animated PowerPoint (excerpts above) thanking PHLF for providing a series of virtual tours through its “Building Pride, Building Character” EITC program during the pandemic.

Teachers from 13 Pittsburgh Public Schools augmented their classroom curricula (Grades 3 through 5, primarily) with a series of educational videos created by our organization between January and early June.

The video series was based on field trips and in-school presentations that we have created previously through our “Building Pride, Building Character” program, made possible through the Pennsylvania Educational Improvement Tax Credit (EITC) Program.

As one Pittsburgh Public School educator responded after participating in the “Building Pride, Building Character Program”: “You didn’t miss a beat. Everything we have seen and heard in person was included [in these virtual tours and video resources]. You did an amazing job of bringing the experience to my students, and they completely enjoyed and appreciated it. They cannot wait to go in-person next school year!”

Our most popular “Building Pride, Building Character” field trips have been converted into a series of educational videos. Each video is approximately 20 minutes long. Louise Sturgess, PHLF’s education advisor, is the narrator. She is joined by notable representatives who are knowledgeable about each landmark. For example, County Executive Rich Fitzgerald welcomes students to the Allegheny County Courthouse. James Hill, the executive assistant to the Mayor, welcomes students to the City-County Building. Denise Turner, acting chief executive and board president of August Wilson House, welcomes students to the playwright’s childhood home in the Hill District.

The “Building Pride, Building Character” video series features the City-County Building, Allegheny County Courthouse, Fort Pitt Museum, Fort Pitt Block House, and Duquesne Incline. Each landmark is associated with a group of “character-building” words, and students are encouraged to develop those traits within themselves.

Students may also explore Pittsburgh’s history virtually through “The Bigham House on Mt. Washington: A Pittsburgh Connection to the Underground Railroad.”

One more video, “Introducing Pittsburgh,” shares the history of Pittsburgh through nine historic images and helps students appreciate the value of diversity in the built environment.

Each of these videos is now viewable publicly on PHLF’s YouTube channel “Renewing Communities.” Although the videos were designed for students in grades three through five, there is valuable information for people of any age.

Click here for a complete list of EITC donors who underwrote our virtual programming with the Pittsburgh Public Schools this academic year. We thank all our donors who contributed to PHLF’s “Building Pride, Building Character” educational program, made possible through the Pennsylvania Department of Community and Economic Development’s Educational Improvement Tax Credit (EITC) program.