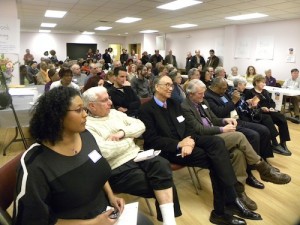 More than 200 people attended the book-signing celebration hosted by the Pittsburgh History & Landmarks Foundation, Historic Hill Institute, and Hill Community Development Corporation on Saturday, February 26 at Ebenezer Baptist Church in Pittsburgh’s Hill District. “This guidebook to places associated with playwright August Wilson’s life and work is the result of the cooperative efforts of many people,” said Louise Sturgess, executive director of Landmarks, “and its power is not to be underestimated in terms of its substance and impact.”

Lead donors Kenya Boswell from BNY Mellon Foundation of Southwestern Pennsylvania and Gerry Kuncio of the Pennsylvania Historical and Museum Commission offered brief remarks, along with the authors Laurence A. Glasco, Christopher Rawson, Kimberly C. Ellis, and Sala Udin. The authors and PHLF presented complimentary books to high schools, colleges, and libraries in the city and county.

The guidebook was supported by a Preserve America grant from the National Park Service, administered under the Preserving African American Heritage in Pennsylvania program of the Pennsylvania Historical and Museum Commission. The Multicultural Arts Initiative and 75 PHLF members and friends also contributed to the guidebook.

August Wilson is one of America’s great playwrights. He lived in Pittsburgh from his birth in 1945 to 1978, when he moved to St. Paul, MN, and later to Seattle, WA. He died in 2005 and is buried in Pittsburgh. Wilson composed 10 plays chronicling the African American experience in each decade of the twentieth century––and he set nine of those plays in Pittsburgh’s Hill District. He turned the history of a place into great theater.

“It’s very exciting to be part of an excellent project that results in a resource that will help make Wilson’s life and work more accessible to the public, become the basis for public tours, and encourage people to care for and preserve the Pittsburgh places connected with the African American playwright,” said Gerry Kuncio.