A Place Where Image is Everything 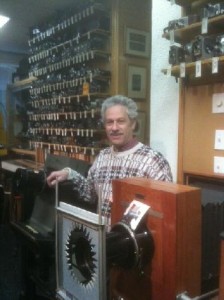 You know how some projects are so compelling that you can start them at 8 p.m. and not realize the time? Suddenly it’s 2 a.m. — but time had ceased to exist.

That happens to me when I immerse myself in old journals or boxes and files of historic documents and photos. It could have happened this morning at the Photo Antiquities Museum, 531 E. Ohio St. in Deutschtown except that I have an Historic Review Commission meeting to cover at 12.30.

Bruce Klein (that’s Bruce in the camera room) founded the museum 17 years ago in a huge Victorian building that his collection has outgrown. The storefront had been his photo exchange shop. He had some daguerreotypes about which customers kept asking, “What are those?”

He decided to exhibit them. That first case grew to two, then three. He systematically has collected and filled what had been an otherwise empty three story building.

Exibits include a replica of a late 1800s photo studio with natural skylight, a room of photos from Allegheny City (today’s North Side), a room of cameras shoulder to shoulder in cases and on shelves and a case of lantern slides — handpainted glass panels projected by a carbon arc lantern projector.

People used to go to great halls to see them projected as large as movie slides. I could look at those slides all day. They are all little works of art, and Bruce has a magnifier sheet so you can see them enlarged. He said he has tens of thousands and changes 200 of them every month, so if you’ve seen them in the past, you will see different ones now..

He had hoped to expand the museum when he bought the Allegheny Social Hall, which was built in 1900 in Spring Garden, nine years ago. He put a new roof on the building but has not gotten the funding he needs to restore it into a museum the size of which would allow him to show those lantern slides on the big screen.

The “snow” exhibit — Pittsburgh in White — opened yesterday and runs through March. Its images are of the 1950 and 2010 snowfalls, the two deepest this city has had.

A daguerreotype show runs through March 15.

If you go, plan to spend a couple of hours. Don’t miss the permanent “Shantytown” exhibition, deeply moving images of men in Depression-era shanties in the Strip.

The museum is highlighting a different camera in its camera room every month through the year. The camera on the pedestal in February is an Ansco portrait camera from 1930. In the photo above, Bruce is flanked by two of them, one in a cherry cabinet.

On a horrible day of snow, wind, rain or whatever, the museum is a refuge to help you forget the weather and the time.