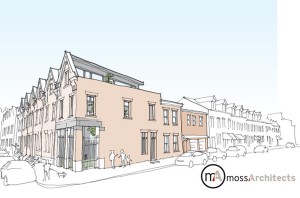 Since they were left vacant in 1995, the row of five historic brick houses on 48th Street, between Hatfield and Butler Streets, in Lawrenceville have fallen into terrible shape. With creative design and green construction, the homes are being restored to look the way they would have when they were built in the 19th century, but with customized modern interiors.

“They’re going to be a high quality product. We’re going to restore the exteriors using real materials, meaning real stone and real slate, and install stone steps and things like that to make them look like when they were built,” says Mendelssohn, who is working with Moss Architects on the project. The interiors will be custom-built for the aesthetic whims of the individual buyers, blending historic elements and original materials with modern features, such as stainless steel appliances, and energy efficient design aspects, like a 2-inch white rubber roof.

“I feel the prices are below market value for what these buildings are,” says Mendelssohn. “It will be good for the neighborhood not to start charging $300,000 for homes in Lawrenceville. You don’t want to gentrify your own neighborhood, you want to keep it what it is.”