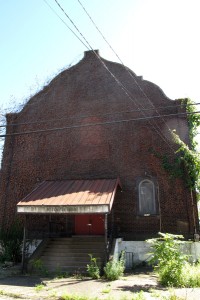 The Madonna del Castello Church at 7416 Duquesne Avenue in Swissvale has sat vacant for five years since its congregation left, leaving the unique brick building to fall into considerable disrepair. The church will experience new life as (a) condominium complex thanks to a partnership between the community, The Mon Valley Initiative, and the Swissvale Economic Development Corporation, who have begun construction that will incorporate many of the church’s original architectural features into the redesign.

“Its reuse as a church wasn’t going to be feasible so we looked at other options to maintain this part of the neighborhood,” says Patrick Shattuck, senior real estate developer for The Mon Valley Initiative, who purchased the property last September for $10,000.

Working with plans by Lami Grubb Architects, Mistick Construction is currently installing structural steel supports and expects the project to be completed by late spring or early summer. The plaster moldings and original arches will stay, becoming part of the new townhouse-style condos.

A former rectory and convent next door to the church had to be demolished but the vacant lot where they once stood will soon be put to good use. “We had hoped to renovate the buildings, but ultimately they proved to be too far gone. It is a buildable lot, so whether we include that in the future phase for a house or whether we leave it for public green space will be determined,” says Shattuck.