The Making of a Mural: Series of Coincidences Led to Collaboration Between Artist and North Side Homeowner 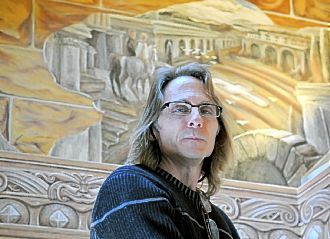 Artist Ken Heusey in front of the mural he created for David McAnallen's renovated kitchen on the North Side. Pam Panchak / Post-Gazette

Life is sometimes like a movie script. Or maybe it just seems that way to Ken Heusey because he worked in Hollywood for 16 years.

Only in a movie would absentmindedly leaving your cell phone on a table in an airport restaurant lead to painting murals in a South Side restaurant and a restored North Side townhouse. The work has been a triumph and a treat for Mr. Heusey, an accomplished photographer and native of Fombell, Beaver County, who did fashion shoots and lighting on movie sets, including making Matt Damon look good in “Oceans 12.”

David McAnallen, who is finishing a nine-year renovation of an 1860s brick townhouse in the North Side’s Manchester neighborhood, is glad fate brought them together. No one else could have imagined and created the classical mural that draws your eyes up the moment you step into his kitchen.

“The collaboration with Ken was wonderful. As you walk around, you’re captivated. It sucks you in,” said Mr. McAnallen, a psychologist. 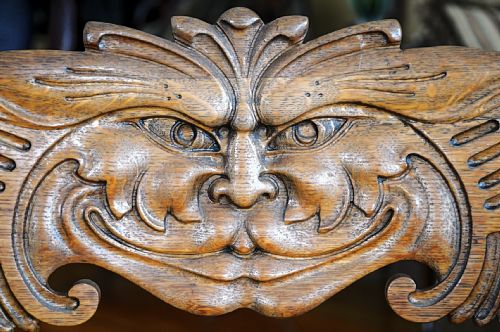 Detail from the back of a McAnallen family heirloom chair. Pam Panchak / Post-Gazette

Mr. Heusey, 46, was heading back to Los Angeles a year-and-a-half ago when he stopped to eat at the T.G.I. Friday’s at the Pittsburgh International Airport and left his cell phone. Upon his return, he stopped in and asked to see the manager who was holding it for him. The server he spoke with recognized him — She was his 10th-grade date for the homecoming dance at Riverside High School.

That connection led to an introduction to the owners of Hofbrauhaus Pittsburgh on the South Side. Last fall, Mr. Heusey painted a large two-section mural of 19th-century barmaids and beer drinkers on the terrace overlooking the beer garden. He was finishing that project when he met Mr. McAnallen while the two men were working out at the North Side YMCA. When Mr. McAnallen saw his photos of the Hofbrauhaus project, he decided he’d found the artist to decorate his newly renovated kitchen. 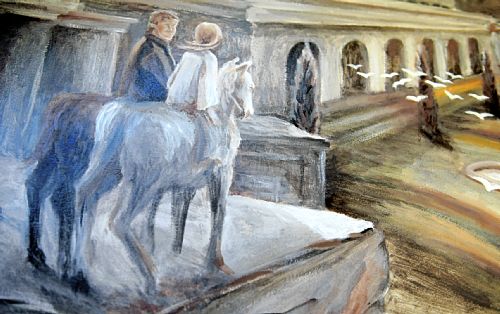 “I had thought about a mural before, but it never happened,” he recalled. “The space is so angular. I wanted to soften the angles.”

The space is an alcove around a new Velux skylight Mr. McAnallen added to the kitchen. Although Mr. Heusey had in mind a prominent spot visible from the doorway, it ended up closer to the ceiling, revealing itself gradually as a visitor enters the kitchen. The homeowner wanted something subtle.

“It was too big, too bold there,” Mr. Heusey agreed. 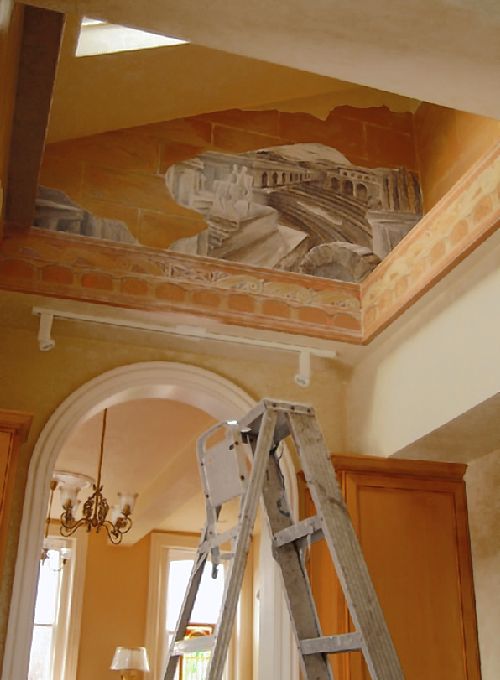 This in-progress photo shows Ken Heusey's mural below the skylight.

The artist suggested a trompe l’oeil painting in which old sandstone walls and a fragment of an old mural peek out from beneath layers of plaster. His inspiration for the classical scene came from a Gustave Dore engraving, “Isaiah’s Vision of the Destruction of Babylon.” He liked the mood of the drawing, especially the stormy sky. Mr. McAnallen liked it, too, but he asked the artist to take out the debris. He also added a pond similar to the one the homeowner had installed in his side yard. Isaiah was replaced with one horseman, then two.

“I like to create a story,” Mr. Heusey said, adding that he leaves the story’s details to the viewers’ imagination.

He copied the pattern of the faux stone corbeling beneath the scene from a nearby building and the carved lion’s face from an oak chair that is a McAnallen family heirloom.

Mr. Heusey spent about three weeks working on the painting, interrupted by the holidays. Before he started, he warned Mr. McAnallen that he would probably have concerns in the middle of the project, when he was still roughing in the design. He was right:

“I panicked only one time,” Mr. McAnallen admitted. “A lot of orange was coming through. I thought ‘Did I do the right thing?'” 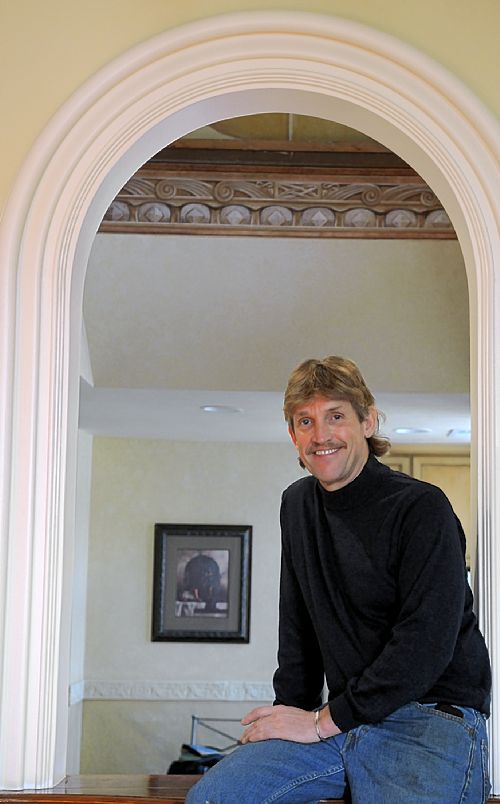 David McAnallen at his home on Sheffield Street in Manchester on the North Side. Pam Panchak / Post-Gazette

The artist explained that the orange was underpainting and that it would not look that way in the final painting. And it doesn’t.

The two men declined to say what the project cost. Mr. Heusey, who spends about half of his time painting murals and the other half doing commercial photography, said his price depends upon the size, detail and complexity of the project. He says collaboration between artist and client yields a painting that pleases both.

“We let it evolve,” he said. “By going back and forth, we created something better.”

To contact Ken Heusey, call 310-963-6772 or go to www.khprod.com, which includes photos taken as he worked on the McAnallen project.