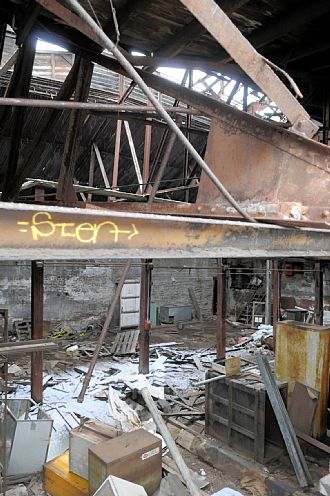 The pipe shop portion of the closed Iron City Brewery is falling apart at the Lawrenceville landmark, on which the city has bestowed historic status. Bill Wade/Post-Gazette

Iron City Brewing Co. president Tim Hickman sounded urgent Dec. 1 when he asked the Historic Review Commission to let him tear down one of five buildings the city had granted historic status earlier in the year.

“The roof has collapsed,” he said, describing the original ice house in the former brewing complex in Lawrenceville. “The wooden I-beams have rotted and collapsed and the west wall is collapsing.”

Last week, the commission reconvened for a hearing, and Mr. Hickman was fighting to calm his agitation as the discussion drew out. A photo projected onto a screen showed twisted metal trusses hanging in a blue background — a rectangle of sky through the roof.

The brewing company had been cited by the Bureau of Building Inspection to abate the condition, which acting bureau chief John Jennings called “very dilapidated.” But the Historic Review Commission had a longer-term concern about the building, which dates to the 1890s.

And that concern is this: Would demolition of the old ice house prove to be a terrible mistake, jeopardizing a developer’s chances of getting a 20 percent tax break should this property become part of the National Register of Historic Places?

Although Mr. Hickman said a year ago that he embraced the historic status for the economic redevelopment possibilities, he told the commission last week he has not sought national status.

This raised some commissioners’ eyebrows.

Any future development project would almost assuredly depend on the tax credit, without which the company could be stuck with a white elephant.

“Is it your intention to seek tax credits to market this property?” acting chair Ernie Hogan asked him.

“We are still trying to determine that,” said Mr. Hickman, citing the company’s uncertainty over two other buildings that are unusable unless giant tanks can be removed from them. “If I can’t get them out,” he said, “who cares that it’s historic?”

The city approved historic designation for the complex of buildings in February, which automatically kept the company from dismantling any except for one that was exempted — a non-contributing 1970s rectangle. The company still has headquarters in the original building at 3340 Liberty Ave.

Mr. Hickman originally had wanted to demolish all but the headquarters, but preservation advocates seemed to have convinced him the complex was more valuable intact.

“We’re as concerned with the history as anybody in this town,” he said last week, “but if we lose a life, I don’t care about tax credits. I have security 24/7 running off copper thieves.”

As the owner, Mr. Hickman argued, shouldn’t it be up to him whether he wants tax credits?

Mr. Hogan said the commission is responsible for making sure historic buildings have available resources for preservation.

“If that demolition were to jeopardize the integrity of the assemblage, it could jeopardize any federal money to the site,” Mr. Hogan said. “[Mr. Hickman] would be turning his back on any public subsidies.

“I think this property is important. It could be eligible for federal transportation money [being on a bus route], sustainable communities grants, HUD money, all sorts of money.”

The Penn Brewery in Troy Hill was restored using federal tax credits, he said. Similar restoration “could be a huge economic driver” for the Lawrenceville portal.

Scott Doyle, grant manager for the Pennsylvania Historical & Museum Commission in Harrisburg, said the determination of a building’s importance to an overall site “comes down to hardship or a level of significance.”

One way a building in a historic cluster could get a pass is “if it’s outside the period of significance for the property.” Other provisions exempt properties that “lack significance and do not occupy a major portion of the site, and if evidence is presented to show that retention is not economically feasible.”

The hardship provision applies “if a property is so deteriorated or altered that its integrity has been irretrievably lost,” he said.

In order to review the case, the PHMC would need a structural engineering report, photographs, historic documentation and cost estimates for repair.

The brewing company was a regional economic powerhouse in the late 19th and 20th centuries. Founded in 1861 as Frauenheim, Miller & Company, it brewed one of the country’s first golden lagers. It became the Pittsburgh Brewing Co. in 1899 in a merger of 20 regional breweries.

Among the brewery’s firsts were the snap-top can, the twist-off resealable bottle top, draft beer in cans, aluminum beer bottles and the original light beer, Mark V.

Last week, Mr. Hickman said he is “trying to embrace this process, but what’s the time limit? I have the city [building inspection] telling me you must do something, so I come here to do something and I’m told ‘Let’s wait.’ ”

The commission is expected to consider demolition in February, when an answer is expected about the building’s importance.