Some in Carrick Strive to Save Victorian House 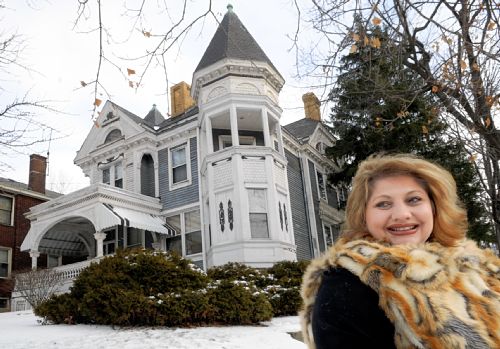 Julia Tomasic of the Carrick-Overbrook Historical Society is trying to save the last great Victorian home in Carrick, at 1425 Brownsville Road, by nominating it for historic status. Bob Donaldson/Post-Gazette

At one corner of Brownsville Road and The Boulevard in Carrick sits state Rep. Harry Readshaw’s funeral home. Across The Boulevard, a late-19th-century Queen Anne house is the last of the grand Victorians remaining on the main drag.

Its owners want to sell and may have a buyer in Mr. Readshaw, who said he is interested in buying the property and that demolishing it to provide parking “might be a decision to be considered.”

Mr. Readshaw’s interest has spurred the Carrick-Overbrook Historical Society to try to save the house.

Historical society member John Rudiak documented the property and this week nominated it for historical designation. He said demolition of the house would put an end to any evidence of Carrick’s Victorian heritage.

The nomination would stall any plan to demolish the house until the Historic Review Commission could determine whether it is eligible, based on a set of federal criteria. Eligibility ultimately must be decided by Pittsburgh City Council. Historic status regulates changes to a building’s exterior but not to its interior.

Richard C. Gasior, whose wife’s family has owned the four-bedroom home since 1952, said the family needs to sell it and has been advised that $150,000 would be a fair price. “If I can’t get anybody to buy it, I’m going to go with Readshaw,” he said.

Known as the Wigman House, it was built in the late 1800s by William Wigman, owner of Wigman Lumber on the South Side. The nomination states that it is “the last remaining example of several homes of the wealthy South Side gentry who lived in Carrick.”

The current owners gave a tour to members of the Carrick-Overbrook Historical Society several weeks ago, said Julia Tomasic, a founding member of the society.

“We’d love to buy it, but there are just three of us” in the society, which has no money, Ms. Tomasic said. “It has a brand-new furnace, a slate roof and the interior woodwork and walls in original hardwood, with six fireplaces, including one converted for wood. Nothing has been done to alter it.”

According to the Pittsburgh code for historic preservation, a property must meet at least one of 10 criteria to be eligible for preservation.

The nomination papers cite several possible eligibilities. One is that the home, a classic American Queen Anne, has not been modified. Its features include an asymmetrical facade, front-facing gable, overhanging eaves, polygonal tower, shaped and Dutch gables, a porch covering part or all of the front facade, a second-story porch or balconies, pedimented porches, dentils, spindles, differing wall textures including fish scales, and oriel and bay windows.

“We heard rumors for a year that Harry [Readshaw] would buy it to tear it down, and we thought it was a joke because we consider Harry a friend of the neighborhood,” Ms. Tomasic said. “Parking? You park on the street. We’re city people.”

“It’s not like I’m sitting here champing at the bit with a sledge hammer,” Mr. Readshaw, D-Carrick, said, “but business is business and any business is looking to improve its services.”

“And if we don’t get it, what happens to it?” he said. “Somebody dying to live in a big Victorian who would be a wonderful neighbor would be a positive.” A Section 8 landlord is a more likely prospect, he said, adding, “The 29th Ward has been inundated with Section 8 housing.”

Brownsville Road once had several grand Victorian homes owned by prominent businessmen. As a hilltop neighborhood, Carrick was a refuge from the smoky city. Through much of the 20th century, it was solidly middle class and owner-occupied. It remains so, but some of its stability is eroding.

In its argument for historic status, the historical society calls the Wigman House the most prominent home in Carrick, “our crown jewel Victorian.” Losing it would be a shock, the document reads, and “one more loss that we cannot sustain.”