Fairbanks Feature: A New Train of Thought— Missing from the Fairbanks Archive!

The Archive is seeking biographical sketches of family members and/or friends who were involved in some capacity of railroad employment. Currently we have vignettes about railroaders who worked in various parts of the country and in some cases lived very early in the 20th century.

Pittsburgh-area railroaders should certainly be written about and their work stories submitted to the Archive. These people worked long, hard, and many times dangerous days. We need to have a record of their professional experiences. All stories can be as long or short as the writer wishes (one page or more). Any pictures of the railroader or related  paper memories can be added, but are not necessary.

The stories are cataloged by family name in our data base, cross referenced with the specific railroads mentioned, and available to be read by all who visit the Archive. This will be a chance to leave a record for railroad history.

MISSING––yes! All those biographical sketches that as of yet have not been sent by mail or e-mail to the Fairbanks Transportation Archive. Stories can be mailed to: 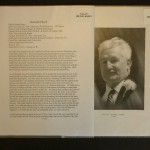