In the golden days of railroad travel, amenities abounded for the rider, especially on the long distance excursions. Railroads provided decks of cards to passengers, many times given out free. These cards were good advertisements for the sights that could be seen along the way. They also showed pictures of the rail cars and engines of that particular rail line and/or reminders of the great historical background of a railroad. Many of these cards came in durable boxes; some are covered in velvet-like material. These cards were not produced to be discarded at the end of the journey. There is a high quality, good, long-lasting feel to the cards.

Frank Fairbanks collected these cards as he traveled the United States. The Fairbanks Archive has playing cards from 46 different rail lines, given out on train trips between 1952 through 1965. Some of the decks still have their seals intact, and some have been opened but the cards have never been used. All the boxes of playing cards are on display in the Archive, and patrons can handle and examine each box. 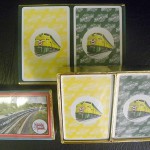