Frank Fairbanks corresponded with a wide variety of people. All were railroad enthusiasts, and many of them were only known to him through the correspondence they exchanged over the years. Frank corresponded extensively with several men over many years. Some of the individuals with a large volume of letters are: R. C. Carpenter, John H. Emery, Rick Moser, and Everett L. Thompson. In many cases, there are just a few letters from the same individual. It is truly a mixed bag of reading.

All the letters found in his donated collection are related to railroad matters. Frank wrote some letters to railroad management personnel or railroad-related businesses, calling for corrections to errors he noticed in books and catalogs. Most of the mistakes he found would have gone undetected except by someone with his engineering mind. He enjoyed arguing in print with other railroaders about feet and inches in mileage distances. Very seldom did he need to change his original thoughts.

The pages are full of charts, timetables, and opinions from both sides. The early years have the fewest letters. The last letter found in the donated boxes is dated March 28, 2005, two days before Frank died. It is an ordinary e-mail note––Frank was as current as it was possible to be.

To “Friend Fairbanks” from Chester D. Clements (Wymore, Nebraska; January 28, 1955)
––Apparently FF was requesting a long list of train order forms that this gentleman was selling. Since FF had such a large collection of train orders in the donated materials, maybe this man helped get him started.

To Frank from Stanley Barriger (Claremont, NH; December 2, 1987)
––Personal Christmas letter and an invitation to visit his family in Claremont.

To Mr. Fairbanks from R. C. Carpenter (East Norwalk, Conn; February 2, 2000)
––Two different letters asking for Frank’s help in the map making of a railroad atlas of eastern United States railroads of 1946. It seems they were working together on this. 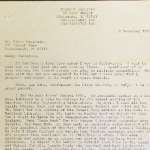 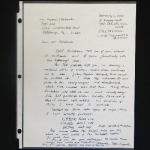