The Cathedral of Learning was constructed of Indiana limestone and built with the pennies, nickel and dimes of area schoolchildren.John G. Bowman, then chancellor of the University of Pittsburgh, came up with the idea for a tower in 1921.

“He wanted a tall building because his intention was the children of working men and women of Pittsburgh would see the tower and be inspired to get an education,” said Albert Tannler, historical collections director at the Pittsburgh History & Landmarks Foundation. 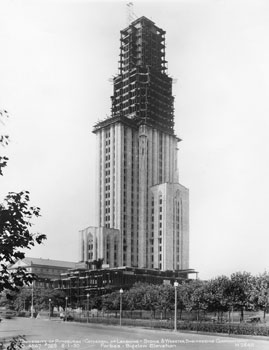 But there was the issue of money. The cost of the building was estimated at $10 million to $15 million, a hefty sum in those days.

In 1925, Marcus Aaron, chairman of the city’s board of education, summoned the district’s teachers to start a “Buy a Brick” campaign. The teachers told students to give 10 cents to Pitt and tell the university how they earned it. The children would get a certificate indicating they owned a piece of the building.As a result, 97,000 certificates were issued.

Parents also gave. In 1926, Bowman went to a meeting of steelworkers and their families in Carnegie to promote his tower.

“A woman stood up with a baby in her arms and said, ‘We got no money, but we’ll go without meat for a week and give you that money.’ Then a man stood up and said, ‘I’ll wear this suit another year and give you the money,’ ” said Maxine Bruhns, director of Pitt’s Nationality Rooms and Intercultural Exchange Programs, who is working on a DVD, “The Story Behind the Construction of the Cathedral of Learning.”

The cathedral is home to 27 Nationality Rooms, which showcase the culture of the ethnic groups that built Pittsburgh.

The steel skeleton of the building was erected in 1929. After the stock market crashed, the 52-story design was shortened to 40. Still, it was the tallest academic building in the world when it was finished in 1937. It remains the biggest in the United States.

“It was a triumph,” Bruhns said, “symbolizing that those parallel lines going skyward never meet and education never ends.”